Filterdesign specializes in User-Centered Design, a design method which places the needs, wishes and possibilities of people central to every part of the design process.

Last week I was invited to participate in ‘Play the City‘. ‘Play the City’ is an Amsterdam and Istanbul based city design and research organization founded by Ekim Tan: “Play the City introduces games into city-making. Seeing city games as tools of the new democracy and open citymaking. Play the City has been designing city games for various urban questions internationally.” (source: ‘Play the city’ Facebook)
Together with my colleague Rob Prass I went to Pakhuis de Zwijger, where ‘Play the City’ is located, with no specific expectations. After a very friendly welcome we first had to pick an envelope which contains our budget and some rules, next we had to carefully plan and design our area in the Almere Oosterwold project. My cooperation with Rob worked out very well, at least we thought so :-), and after we had bought and carefully positioned our roads, bridges, buildings and energy resources we evaluated what happened during the game itself. 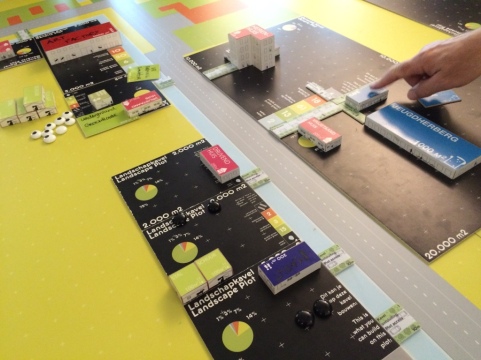 It was very interesting to see how people worked together, made deals, supported each other, designed creative concepts and so on. However, as in real life, there were also disappointments, distrust and (friendly) break ups. After a passionate review we could only conclude that we all had a great afternoon with unexpected insights and fun! Many thanks to the people of ‘Play the City’ for their guidance and support during the (fantastic designed!) city game and the opportunity to participate!

When you’re interesting in playing the city game don’t hesitate to contact the people of ‘Play the City’. In the video a talk by Ekim Tan on the reason why she founded the ‘Play the City’ game.